In 1997 Paris-based artist Claude Closky created a Web project for the Dia Foundation, Do you want love or lust? (www.diacenter.org/closky). Go there (it’s still online), choose love or lust, and you will follow an anfractuous and unending path of either/or links like "In social situations, are you most often feared by others or protected by others?" to another question like "Does the word ‘outlet’ make you jump for joy or leave you cold?" then to "Are you for or against Jane Fonda exercise tapes?" and on, This piece can be taken as, among many things, a satire of multiple-choice pop-psychology tests, a parody of hyperlinks, and an inquiry into the nature of free will. The two-tone pages (one-color text on a solid-color background) are very pretty, and the whole exercise is pretty funny. For those who like their culture interactive, Closky supplies the clickable buttons, and they lead nowhere.

At thirty-nine, Closky has exhibited in nine biennials around the world and has a substantial international following but little exposure in the United States (a not uncommon position for a contemporary French artist). Recently, at the invitation of New York’s Location One curator Nathalie Angles, he mounted his first US solo show, which runs through the end of this month. There, he premieres TPI (Television Programs for Internet), 2002-2003, an installation piece he’s been developing for over a year and that exists independently on the Web (www.locationl.org/closky). 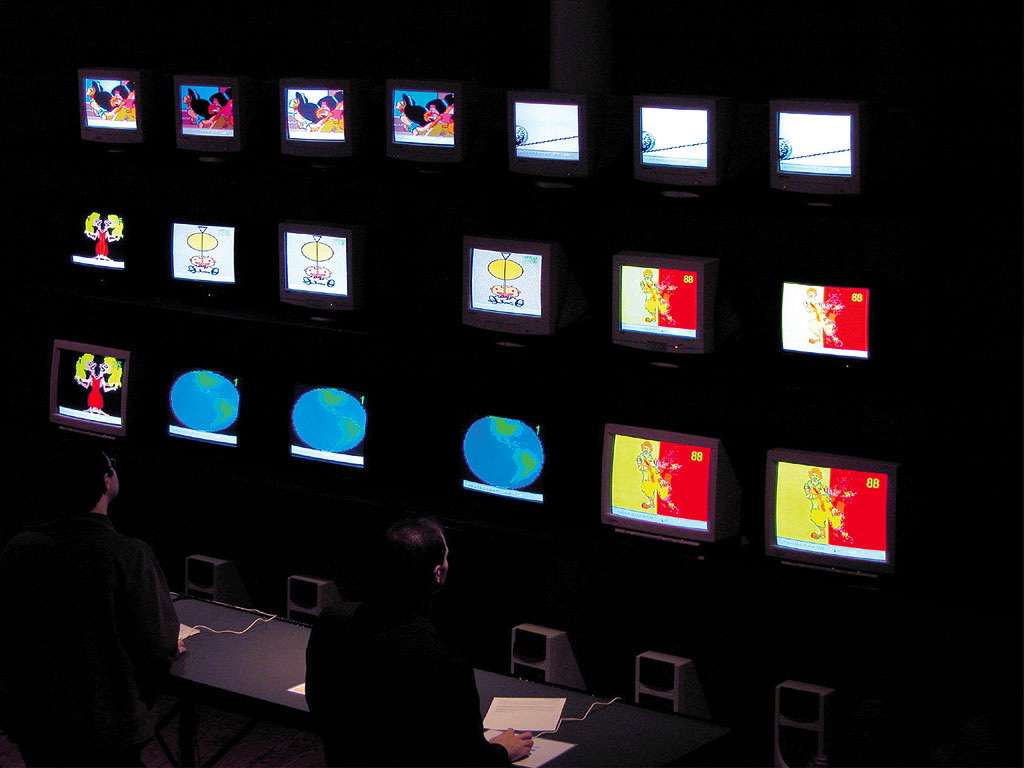 As installation (in a refreshingly spare setup), TPI consists of nineteen monitors tiered three-high on a freestanding wall of steel shelving. A countertop functions as an extended mouse pad holding half a dozen mice that viewers use to sun’ TPI’s ten thousand channels, which are individual animated GIFS and converted QuickTime files. A handful of these are Closky’s own, but many were culled from the Web by using Google searches for animations. He resized and created several-second loops for each channel and coded all as PHPs. Much like regular TV, TPI isn’t meant so much to be watched as to be moved through, disposing of each channel after a visual nibble. And more engaging than interacting oneself, arguably, is watching the TPI watchers sun’: Observing people raptly switching through minimally moving low-res images enhances TPI’s cunning dopiness.

The project is, in part, about ludicrous abundance–viewing the whole thing on a single monitor would take about five workdays, assuming a very fast connection and unflagging attention. Because Closky often lightly tailors his work to specific contexts, TPI is probably a small dig at America, the land of abundant and vapid TV. But the promiscuity of the Googled selection process also assures a global feel (there’s a lot of anime) and some curious juxtapositions. Tuning to a randomly selected (I promise) channel, 3333, I see two firemen fighting a blaze; at 3334, a pulsing tangerine ovoid against two static gray ovals; at 3335, what looks like a low-definition, spinning Xbox icon; at 333e, a mysterious flickering flame; at 3337, a jumpy, blue cartoon spaceman; and on and on.

Closky dropped out of art school (Ecole Nationale Superieure d’Arts Decoratifs) after only one year, so to a large degree he’s self-taught. Since the mid-’80s he has been compiling and collating lists that obey his own quirky, self-imposed conditions and instructions. Early works include a list of The 3,415 Friday the Thirteenths from the year 1 until 1991; a series of photographs of digital watch faces that display his favorite "minutes" (12:34, 3:21, etc.); and The 365 days of 1991 classified by size, 1991-92, a list of all the days of 1991 spelled out and ranked in ascending order determined by the total length of the words ("Friday the fifth of July" being the first and "Wednesday the twenty-seventh of November" the last date on the list). These are but three ticks on an incredibly long list of obsessive-compulsive tasks he set for himself early on, and such works were often installed in what seemed a send-up of Conceptual art formats: cheap booklets, sweeps of A4 paper and snapshots gridded on the wall. Through the ’90s and to the present–at Galerie Jennifer Flay in Paris and Galerie Edward Mitterrand in Geneva, and in traveling museum exhibitions such as "Shopping," which originated at the Schirn Kunsthalle in Frankfurt–Closky refined his presentation, Works would often have incarnations in several media: His collages might function also as magazine art or as a gallery slide projection; his video projections could also be shown as photographic stills. He wasn’t the first artist to make wallpaper, but his multiples are my favorites in that subgenre. In Untitled (Cosmetics), 1997, Closky collaged the ubiquitous flow and spills of beauty products into a profluent maze of turquoise squirts. 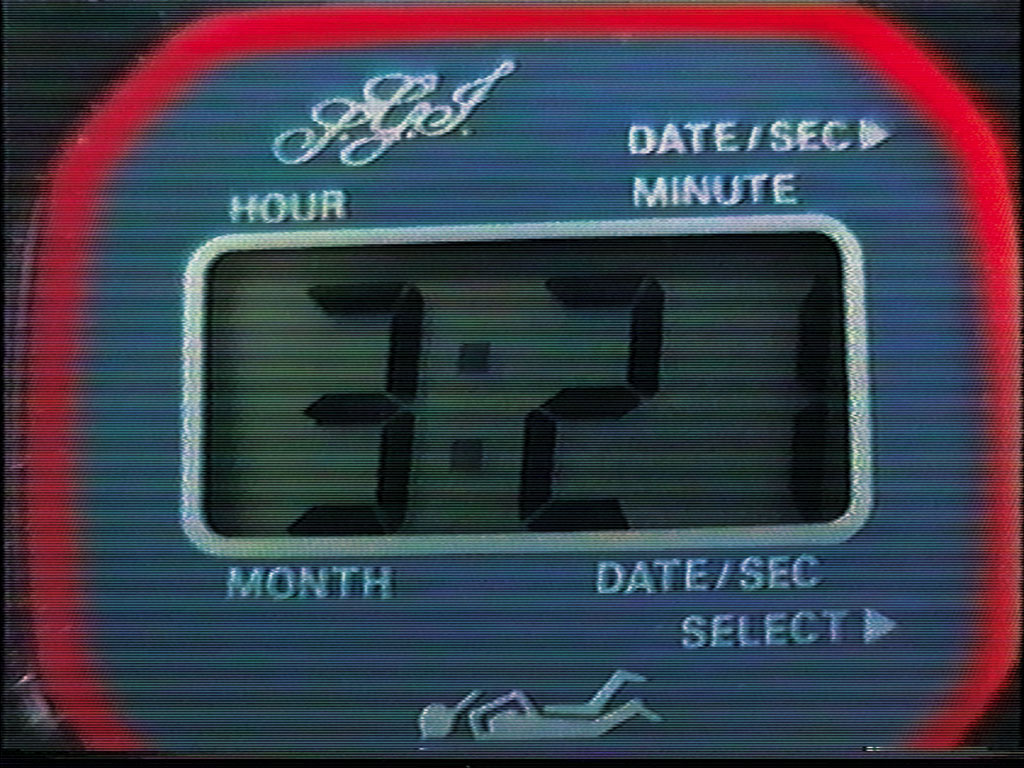 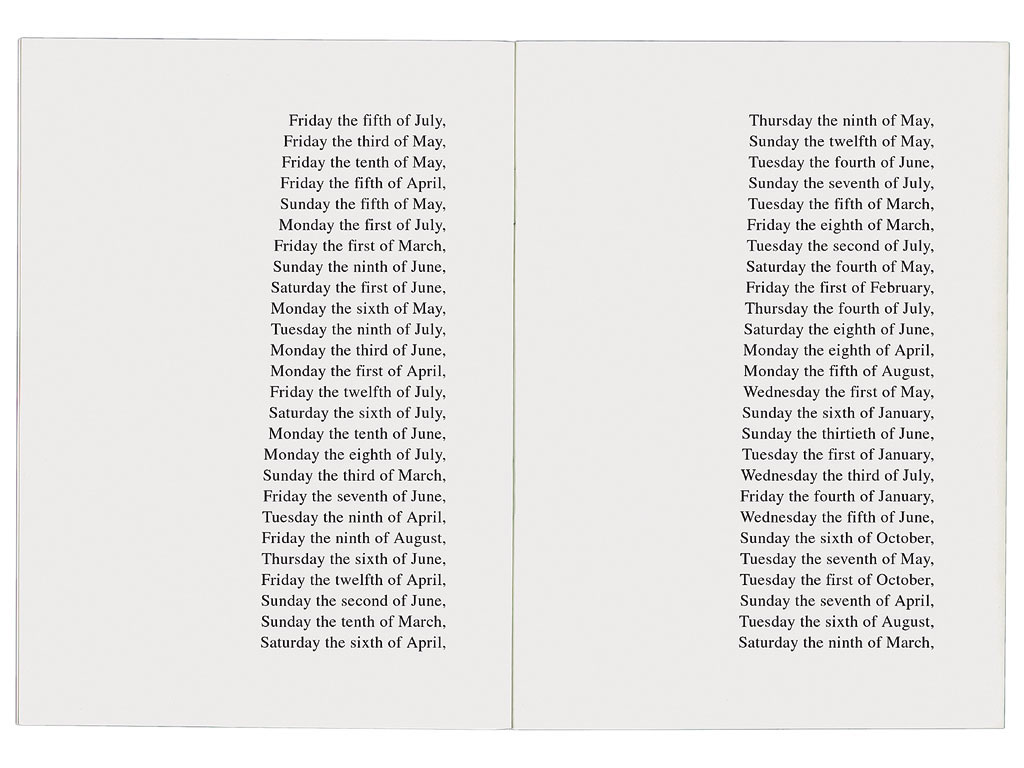 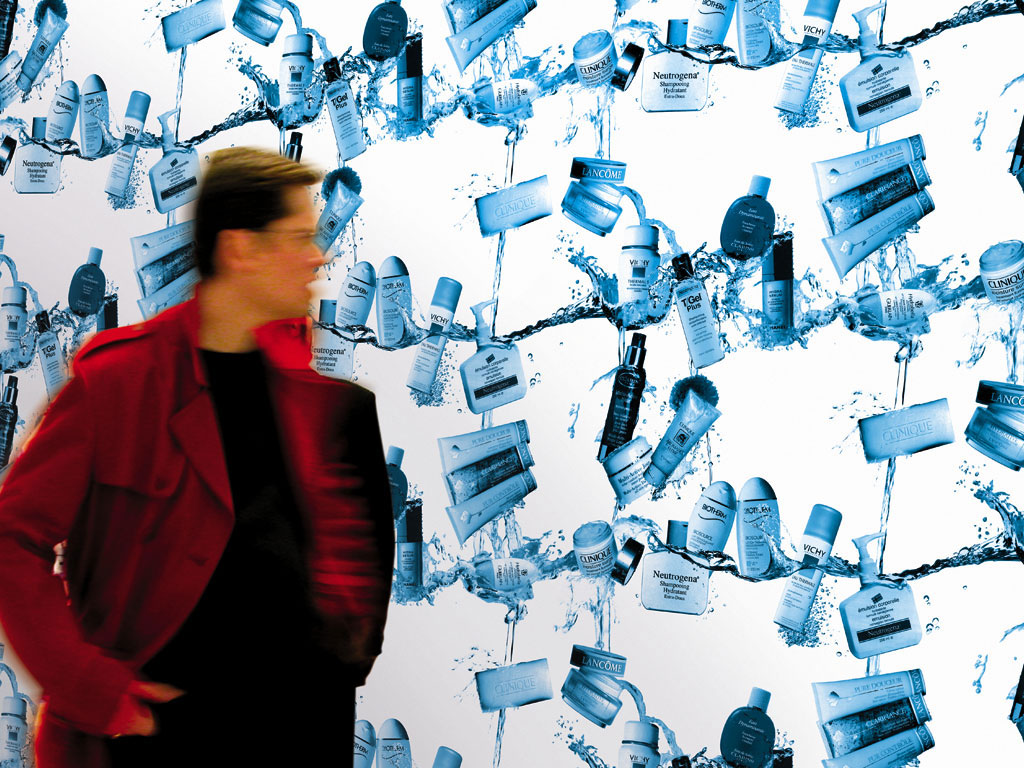 Closky had always used a computer, and in the mid ’90s, when CD-ROMs and the World Wide Web became part of his toolbox, his art found a medium that was a perfect fit. There’s a fair chance that as you’re reading this you’re arm’s length and a click away from Closky’s own site: www.sittes.net/menu. There you’ll be greeted by an image of a friendly polar bear (the mouth has been digitally erased to cutify the beast) and serenaded by a looping clip from the sound track of Bilitis (David Hamilton’s 1977 "art" film). The sexy, funny, chilled, ironic romanticism of this site pretty much captures the flavor of CIosky’s best work, and also, typically, as the music loops on, you’ll probably flip between fascination and irritation. The pull-down menu gives a full resume of his Web work. My favorite sites are Hands and arrows, Interview by S. Laurent, Aller/Retour, Plus vite, +1, Calendar 2000, Couchers et Lever de soleil, and Going for the high score. On that last page, you get to watch Closky play Tetris. "He" was on the 587,225th level when I last checked. 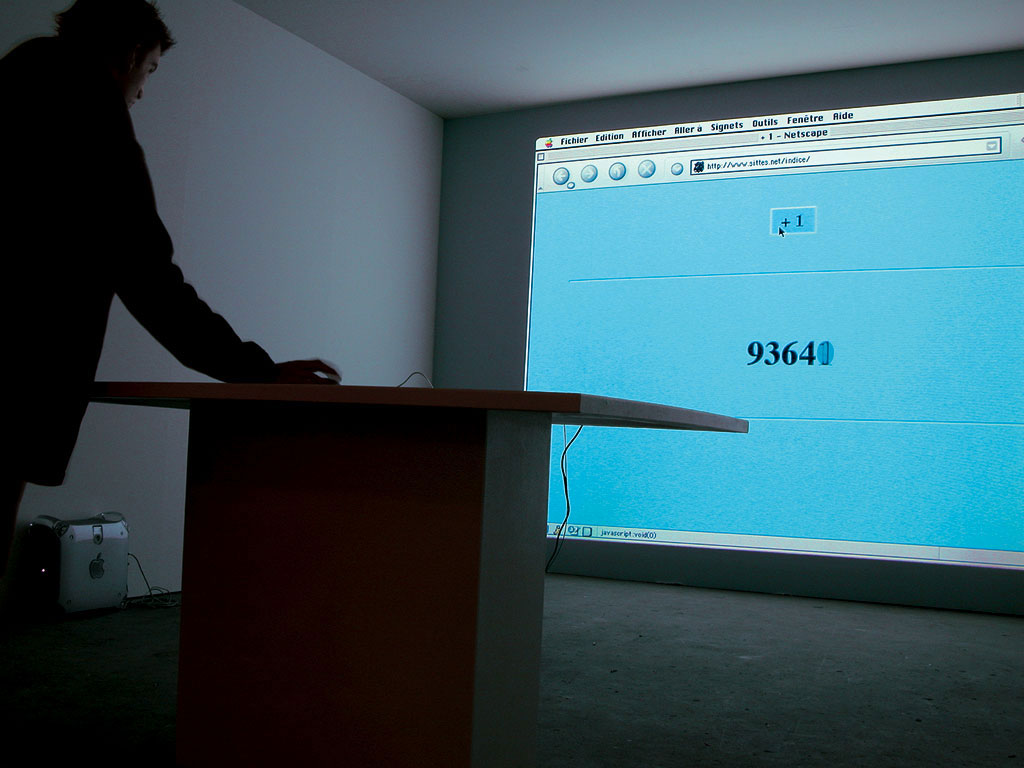 The lightness of Closky’s art belies the depth of its absurdist heredity. Its DNA carries sequences from OULIPO, the Situationists, Fluxus, Beckett, Tall, Buren, and Warhol. It’s funny, smart, gently radical, and maddeningly ambiguous. Nested in all his work, from his very casual collages to the most onerous lists and sites, are what I see as his larger themes–Choice is an illusion, or We are manipulated by senseless systems of our own making, or The game is pointless but fun to play. His recurring use of open number sets and endless loops is threatening–you’ re faced with eternal vapidity, at least until you quit the site, a kind of escape in death.

Closky is brilliant at both playing with and being played by the culture of media. The work feels subversive and self-promoting, critical and seductive. His enchantment with the banality of modern life could seem condescending if he himself didn’t spend countless hours, really all of his time, assembling an art that a user might engage for just a few seconds. He has that Warholian touch of applying just the right something-to-nothing, humor-to-horror ratios to his work, Interacting with Closky’s pieces makes one susceptible to a pathos both local and universal, and to the pleasure of the meaninglessness of it all.